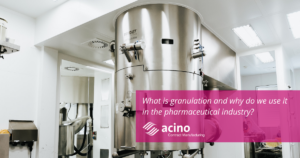 One of the first steps in the tablet manufacturing process is blending the active pharmaceutical ingredient (API) and the excipients (these are components other than the active substances) until a homogeneous mixture is achieved. Granulation helps with this, and it is done either in a free fall blender or in a high-shear mixer with strong shear forces if the API is low-dose.

If you find the information on this page useful, you can download it here. 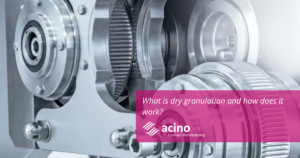 Dry granulation is used when dealing with moisture or heat-reactive ingredients in tablet making process. Instead of using lubricant agents, the blend is densified by force as it passes through roller compactors. The resulting sheet is then broken into flakes, and these in turn are carefully broken into granules.

There are some challenges to overcome though, such as ensuring an even particle size distribution and flowability, and avoiding cross-contamination with dust particles released during the process. 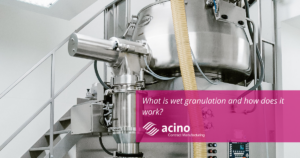 Wet granulation is a widely used tablet manufacturing process in the pharmaceutical industry. Water or an organic solvent is either sprayed or poured into a blend to have its fine particles agglomerated into granules of a desired size with required flow properties.

Wet granulation is often a complex process and involves a variety of equipment and steps such mixing, moistening, screening, drying and sizing.

In essence, the main reason to choose wet granulation is to prepare any combination of drug substance and/or excipients for compression, encapsulation or filling processes, e.g. into sachets.

The two main wet granulation stages are moistening and drying. Both can be carried out in a fluidized bed granulator, or separately – moistening in a high-shear mixer and then drying in a fluid-bed-dryer or on trays. 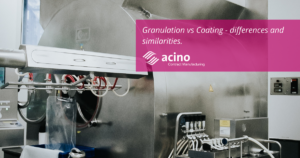 Did you know that the fundamental process for wet granulation and tablet or pellet coating is actually identical? Only the parameters and outcomes are different.

Both use a liquid with dissolved or suspended functional excipients, usually a polymer, which is sprayed on a target. Hydroxypropyl methylcellulose (HPMC) is a polymer used often. During wet granulation it acts as a binder, and during coating as a film former.

In both cases, the solvent evaporates and the functional excipient is applied to the target to enfold its functionality.

The granulation process runs under wetter conditions, lower temperature and higher spray rates to allow the target particles to stick together, agglomerate and form the granulate. If the process runs too dry, the granulate can fall apart.

In coating, the conditions are dryer, the temperature is often higher, the spray rates lower, and the environment less humid. The tablets or pellets do not stick together and are instead coated. If the process runs too wet, the tablets/pellets can swell and stick to each other, causing damages to the coating and the cores.

Maintaining and controlling the right conditions is key to producing high-quality, safe medicine. 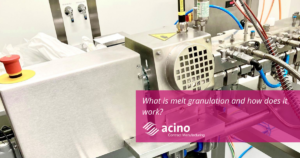 Melt granulation is a manufacturing method used to enhance the flow properties of the composition and increase the uniformity of the drug.

Melt granulation is usually used when processes like wet and dry granulation do not render the desired results. Its advantages include a continuous and solvent-free process and the omission of a drying step.

In melt granulation, the bioavailability of the drug is modified by adding excipients such as surfactants or crystallization inhibitors; by changing its polymorphic characteristics; or by embedding the drug into a solid dispersion.

The API and excipients are combined to form a dry powder and melted together in a melt extruder. The drug and excipients must be resistant to temperatures over 100°C depending on the formulation and the polymers used for melting.

Other liquids can be added if necessary to predefined areas over the course of the process, which includes different stages (or zones) according to temperature, mechanical stress levels, densification, and backwards movement applied to the melt.

The granulation process is completed as soon as the agglomerated powder particles are cooled, extruded through a dye, cut and solidified. 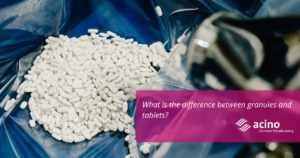 Both granules and tablets are oral solid dosage forms, also known as OSD, but they are taken differently. Tablets are usually administered on their own and are swallowed or chewed whereas granules generally become part of something else, e.g. sprinkled over food or dissolved in a drink. This makes granules easier to administer, for example as a child-friendly drug delivery form.

Acino’s facilities are equipped with state-of-the art equipment to manufacture tablets and granules. Reach out to us to learn how we can support your tableting or granulation projects.

If you find the information on this page useful, you can download it here.